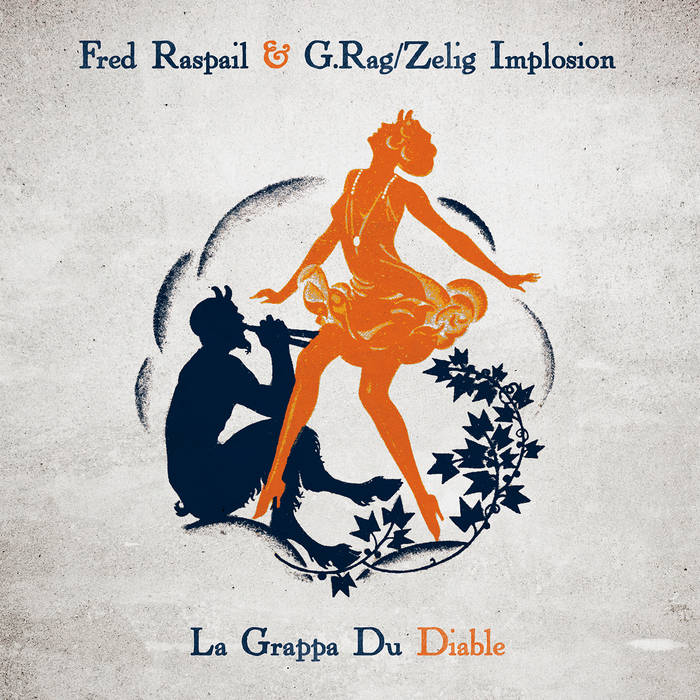 In June 2013, french singer Fred Raspail is invited by THOMAS BOHNET of Tour de France to play his first show in Munchen, at CAFE HULLER.At the time, Fred is recording some stuffs with PIERRE OMER in Geneva. Pierre calls his friend, G.RAG in Munchen, and tells him to go and see Fred’s show. That’s how Fred & G.Rag met. Some coffees, some cigarettes, and one year later, they will be touring together.
En route in winter 2014with monsieur ZELIG on the drums, the 3 guys play gigs in Hambourg, Berlin, Lübeck, Amsterdam, Monaco di Bavaria… And, one evening, in Rott am Inn, by their friends Hagen and Léonie, drinkin’ some grappas and facin the rough winter, they write « LA GRAPPA DU DIABLE »…
This 10 inch is part of our story, and this story takes root in this old Europa we travel year and year out, up and down, left and right to play music…
That’s why we included, besides the dancing hit LA GRAPPA DU DIABLE, some songs that reflect this spirit. « BEAULIEU STREET », a slow folk written by G.Rag in Geneva, « ARMER JONAS », a german yiddish roots song brought by Fred Raspail, and at last, a piece of nowave noblues, « SUNNY BOY », a fresh one looking over the West, again written by G.Rag.
This 10 inch reflects the friendship, the brotherhood, it tastes Fra,ce and Germany both a time, it smells our own Europa, an old dream we are building by ourselves, throurh our music and lifes.
We recorded it live, to keep it fresh, in 2 two days… And gave it to senor MICHA ACHER from the LANDLERSCHWISTER and teh NOTWISTS, who added some devilish horns and sousaphones to complete the story.
We hope you will enjoy listenin and dancin to it, as much as we did recordin it !

He’s « the prince of primitive folk », everybody should know ; Fred Raspail, this french charming singer is touring for a decade now all over the world to spread the primitive spirit. DIY rarities, wild and primitive music.

Bandcamp Daily  your guide to the world of Bandcamp

Cannibal Corpse's George "Corpsegrinder" Fisher stops by for an interview